Dancing on the Moon

During the Summer of 2021, WOLFS proudly announced its representation of Ken Nevadomi (b. 1939), Cleveland’s premier figurative painter of the past four decades. The rich trove of Nevadomi’s paintings and drawings spans a prolific career spent probing provocative subjects that chronicle the close of the Industrial Age and the birth of the Information Age. Painted right here in the Rust Belt, Nevadomi’s work forces us to take a raw look in the mirror at beauty and poetry, but also at horror, meaningless violence, obsession, sex, silliness and fantasy. His work takes us to strange places with dizzying imagination and originality.

Important to this region as a major artist and highly-regarded art professor at Cleveland State University, Ken Nevadomi owned his blue-collar roots fully, a persona that adds another dimension to his appeal and informs his imagery. At the age of 17, Nevadomi left his troubled home in Cleveland, enlisting in the service for two tours of duty. During this time, he began to recognize his talent for drawing, drew extensively from life, and hungered to learn how to paint. Once he got out, he sought academic art training and earned his B.F.A. from the Columbus College of Art and Design in 1972 and an M.F.A. from Kent State University in 1975. From that point on, he never stopped painting, treating his vocation as a second full-time job in addition to his teaching. His productivity was staggering, and the effort reaped recognition. Nevadomi has been included in numerous juried shows and at least 10 solo exhibitions since 1975. His work was regularly included in the Cleveland Museum of Art’s May Shows winning several first prizes in painting. He was awarded the 1988 Cleveland Arts Prize for Visual Arts. 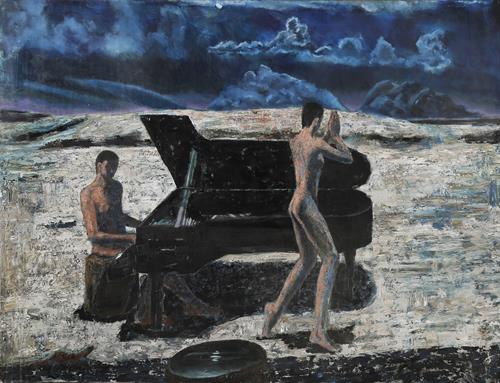